TaxiWars is coming back to PAARD!

TaxiWars is an intensive collaboration between dEUS frontman Tom Barman, saxophonist Robin Verheyen, bassist Nicolas Thys and drummer Antoine Pierre. The music can best be described as a mix of lyricism, poetry and jazz with a rock feel. Their latest album “Artificial Horizon” is a metaphorical step forward from the acclaimed 2016 album “Fever“.

The band reinvented itself and came up with something fresh and personal, tastefully evolving from a cubist jazz sound to a more melodic direction. The band took their music to the next level by adding depth to their compositions, clarity to the beats and efficiency to their overall sound. And so “Artificial Horizon” was born. The album is full of experimentation and creativity and shows a kaleidoscope of styles and sounds.

Barman has fronted Belgian indie legends dEUS since 1989, selling 1.5 million albums along the way. He is also one half of dance duo Magnus and, for the last four years, singer and mischief maker for TaxiWars, his latest project and one that indulges his love for jazz.

Saxophone player Robin Verheyen lives in New York and has built a reputation as one of the great young talents in the world of jazz and classical music. He has released two albums with the Robin Verheyen NY Quartet, and has performed with such artists as Marc Copland, Ravi Coltrane, Narcissus Quartet, Gary Peacock, and Joey Baron.

Bassist Nicolas Thys was a mainstay on the Belgian and Dutch jazz scenes before he moved to New York in 1999. He has toured and/or recorded with legends like Lee Konitz, Mal Waldron, Toots Thielemans and Zap Mama.

Drummer Antoine Pierre has been touring with Belgian guitar legend Philip Catherine and trumpet player Jean-Paul Estiévenart, and others. He moved to New York City in 2014 to study at the New York School of Jazz and Contemporary Music

Explosive and energetic wind music with influences from rock, electro-punk and hip hop... 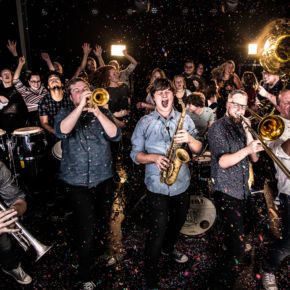