Everyone’s invited! Go download your ticket on the right side of this site >>>>>

LET’S GO! The best garagerock, psych, indie and postpunk. Exciting, new bands that make us extremely happy! Besides this just being a great festival, it’s also the opening of our new concert season after a short summer break.

You can find the timetable here.

BALOJI
This Belgian-Congolese rapper and producer BALOJI mixes futuristic American funk with electronic and hiphop. The result? Totally irresistable and quirky tunes that make it impossible to stand still.

YĪN YĪN
Yin Yin arrives straight from Lowlands, for your portion of psychrock with a Thai twist. Yin Yin makes tropical, Asian folk and is not afraid to bring in some disco tunes and yelling synthesizers.

TAU
The brain behind the hypnotising psych/drone of TAU is drone-adventurer Shaun Nunutzi. Besides performing in TAU, Shaun is a part of psych band Dead Skeletons, who make sure you go through an outer-body experience through their music.

MOLLY SARLÉ
The new album of Molly Sarlé is filled with dreamy, mellow-songs with a lot of folk influence. The singer used to be a part of the band Mountain Man, which is known for their tradional Appalachians folk  sound. The band got loads of positive reviews from the press and it seems like Molly’s solo career will too.

EGYPTIAN BLUE
Razor sharp guitars and sharp hooks: Egyptian Blue from Brighton brings colour to the evening with their strong postpunk. The four men are loved by IDLES and it won’t take long until the band outgrows our small venue.

BLACK FLOWER
According to the BBC, this Belgian band is ‘brilliant’. Expect an ingenious and psychedelic mix of Ethiopian jazz, European balkans, exotica and other influences from all different kinds of worlds. There’s a big chance Black Flower might be the highlight of the evening.


Sunny dreampop with surf-influences and a impressive backbeat. The Canadian Tallies convinces 100%, thanks to their superstrong songs and catchy guitar tunes. 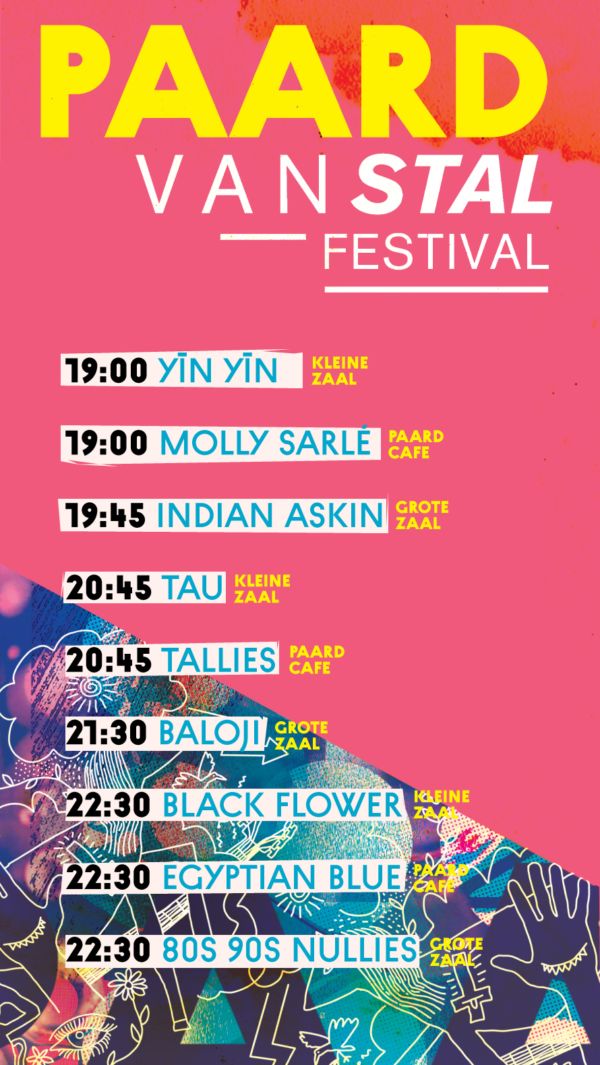